So, you have decided to get your very own personalized Hebrew tattoo?

A good first step would be to learn a little bit about the Hebrew language, so you will have better knowledge of your options.

Hebrew has been around for millennia, was the original language of the Bible, and is still spoken today by more than 10 million people. It belongs to the Semitic branch of the Afro-Asiatic language family, and is written using the Hebrew alphabet which dates back some 3,000 years. Hebrew was the spoken and written language of the Jewish people in Biblical times, became a liturgical language later on, and was revived as a spoken language in the late 19th century. 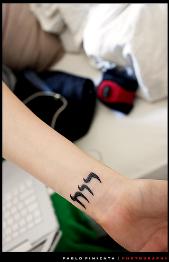 The Hebrew script is written right-to-left. It is an abjad alphabet, which means that only consonants have letters, and vowels are left unwritten. Still, even in Biblical times there was already use of maters lectionis, which allow for partial vowel marking using letters. In the first centuries A.D., a second system for writing vowels with points around the letters was added, called Nikkud. Today, Nikkud is used in poetry and children’s books, while mater lectionis use is sufficient the rest of the time. Bible scrolls are copied without Nikkud, as they were originally, but book-form Bibles contain Nikkud to make pronunciation clear, as well as a second system of pointing for chanting.

A few points to consider, when deciding on a Hebrew tattoo:

1. Languages are different. A phrase that works in English might sound odd or meaningless in Hebrew, and vice-versa. That is why a good translator is necessary in order to translate an idea from one language into another.

2. Fonts: Hebrew, like English, can be written in a variety of fonts. Go to our phrases or words page to see an example of the wide selection of fonts we offer, so you can choose the one best suited to the feel of your text and your personal taste. Upon purcahse you recieve a catalogue with dozen of different fonts and designs.

3. Nikkud: Here the question is – to Nikkud or not to Nikkud? We offer both, and you can choose whichever look you prefer. If you are having trouble deciding, our translator will be happy to consult you regarding what would be more appropriate for your text.

6. Numbers and Dates: The traditional Hebrew system for writing numbers uses the Hebrew letters. This system is used today mainly to write the dates of the Hebrew calendar. When translating a Gregorian (western) date into Hebrew, there are two main options:
a. Calendar conversion: Converting the Gregorian date into the corresponding Hebrew date, and writing it using Hebrew numbers.
b. Translation: writing the Gregorian date using Hebrew words or Hebrew numbers.

7. Gender Specificity: Hebrew, being a gender specific language to a greater degree than western languages like English and French, must be translated into with that taken into consideration. The gender of both speaker and audience must be known in order to translate accurately.

8. Direction and Orientation: As previously mentioned, Hebrew is written right-to-left and top-to-bottom, in that order. Hebrew letters written top-to-bottom are the same thing as writing English
L
I
K
E

9. Print and Cursive: The Hebrew alphabet has two writing styles, the Print style used mainly for printing, and the cursive style, used mainly for writing by hand. The look of a Hebrew inscription is greatly affected by the style of alphabet chosen.

The Team Behind My Hebrew Tattoo

We are native Hebrew speakers with a profound knowledge of both English and Hebrew language, grammar and legacy. We also have a Bible scholar. For any Bible inscription, we will advise you on choosing unique Bible verses for your Hebrew tattoo or will explain the meaning (or meanings, if exist) of your chosen verse. We also have experienced English to Hebrew and Hebrew to English translators, so you're positive that you are getting the tattoo you want!